“They Had Us at Hello”– Structura Lights Up The District Detroit

“They Had Us at Hello”– Structura Lights Up The District Detroit

It broke ground in September 2014 and opened three years later. Now Detroit’s Little Caesars Arena in The District Detroit is home to professional hockey, professional basketball and many other sports, entertainment and community events.

Picture this: inside the arena, the Via Concourse not only enhances arena events, but it’s also a unique destination for hosting a variety of public and private events. The arena is also surrounded by many, many distinctive dining and shopping opportunities. In addition, the adjacent Chevrolet Plaza and Budweiser Biergarten have expanded the whole experience to the outdoors. They are destinations on their own for hosting thousands of people in a unique setting.

That’s what made participation in the arena project so enticing to the Structura team, according to Structura’s Chief Executive Officer, Derek Seitz. He says, “We’re lucky to be included in a variety of different projects, but not many have the community impact like this did. Getting to play a role in it was just awesome. Knowing you’re part of something this big and important for the redevelopment of a city is a great injection of adrenaline for everyone involved.”

HOK is a worldwide design, architecture, engineering and urban planning firm that led the way on the arena. Paul J. Leskovac AIA, Senior Project Architect from HOK – and the lead architect on the entire project – says, “There were a number of things that made this project exceptional from a design standpoint. First, the overall ‘detached’ design of the seating bowl from the concourse amenities is incredibly unique. This allowed the normally enclosed concourses to become open and inviting, and have an urban streetscape feel, rather than that of the prototypical interior space. Secondly, the exterior spaces created by that detached design idea, to both blend in and accentuate the urban feel of the site – are exciting. Lastly, what also made this project so different 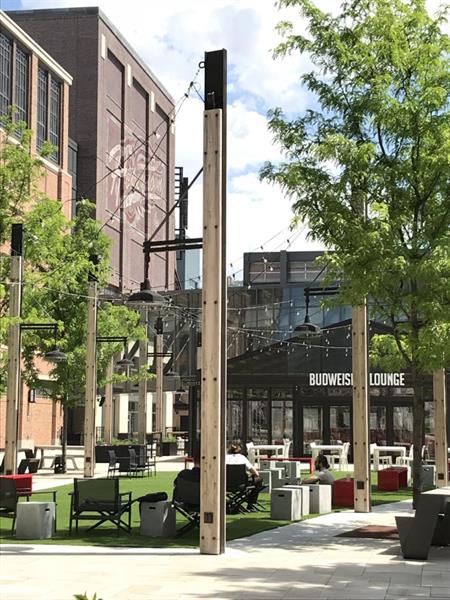 is how incredibly in-tune the ownership group was with all the intricate details of the arena, with the goal of making it a great place to watch a hockey game, but also the best place in the world to experience a concert.”

Structura was ready to jump in on the project from the get-go. Says Seitz, “When leaders in design like HOK and Smith Group JJR [a Detroit-based architectural, engineering and planning firm] asked our company to participate in crafting unique lighting elements, they pretty much had us at hello. We knew that their site vision and our capabilities would produce a one-of-a-kind environment for people to enjoy for decades to come.” Leskovac echoed the sentiment, saying, “We were thrilled to be part of this. It was important to participate in the continued revitalization of the city of Detroit while creating a world-class sports and entertainment facility, and –oh-by-the-way– to help create a fantastic new home for the Detroit Red Wings and Pistons while we were at it.”

Working on an amazing arena and beer garden isn’t all fun and games – or is it? According to Leskovac, Structura was, simply put, their first stop to select the site lighting elements. Structura’s timeless designs fit into what HOK was hoping to accomplish, and HOK knew that if they wanted something custom – Structura was, without a doubt, the group to pull it off. Leskovac says candidly, “The Structura folks proved us right on all fronts, and were fantastic to work with throughout the project.” Meanwhile, back in Kansas City where Structura is based, Seitz says the company was used as a toolkit of parts and capabilities that the design teams at Smith Group JJR and HOK used to create unique designs to fit the story they wanted the arena to tell. “Then once the plans were handed off, our team of in-house designers and fabricators went to work to put that vision into the products that are installed today.” This can’t be carried out by anyone else in the industry, as Structura has the secret sauce: engineers, designers and big thinkers – all on staff. In short, says Seitz, “Structura’s custom H-beam and wood poles in the Budweiser Biergarten are a great combination, representing the industrial history of Detroit while also softening the look with wood sides.”

On the other hand, when asked about his favorite part of the project, Leskovac says watching people come into the facility for the first time, seeing their expressions as they are blown away by the spaces gave him a great deal of satisfaction for the hard work the design and construction teams put in to make the facility a reality. On top of that, he confesses, “I’m a nuts-and-bolts-type of architect, so I love the construction process as it relates to transforming a vision into something real. Being intimately involved from design through opening day of this facility was extremely rewarding.”

On top of that, the project has won numerous local, national and international awards – and of course, HOK and Structura alike appreciate those accolades [see sidebar]. Leskovac says proudly, “Personally, many of my friends have visited Detroit since Little Caesars Arena opened. They have told me how the city has absolutely transformed into a fantastic destination, and what a great experience they had at Little Caesars Arena while attending a game or a concert. That’s exactly what we were shooting for.”